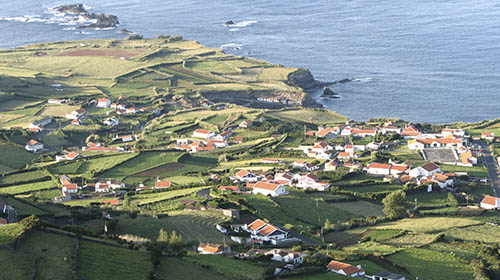 The main sector is represented by the milk production chain. Here the effort will be based on creating the conditions to establish a rural entrepreneurial ecosystem in the Azores Archipelago that seeks for quality and sustainability in the production chain. The main challenges here to face are: difficulty in acquiring land and low payment in the primary sector.

Azores Archipelago has nine islands. The rural sector, including the associated processing industry is one of the most important dynamos in the regional economy, being the main activity daily and meat production. Azores rural areas represent almost 80% of the territory, where the agricultural operations represent 56% of useable area, mainly comprising by grazing lands (92%). A special emphasis on the daily excellent conditions that make agriculture very productive. Primary and agro processing activities play a relevant role in the Region’s socio-economic structure account. The agriculture is main economic activity in the primary sector and occupies a 8,5 % of GAV (Gross Add Value), facing the 2,5 % Portugal’s GAV. A shrinking pool of agricultural labor, with a high dependence on family labor (about 80%), with inhabitants engaged in family agriculture representing 17.3% of the Region’s resident population (higher than the Portuguese average, which is around 7.5%). The region’s economic development is conditioned by its geographical conditions due a triple dispersion, the island status, the distances between the nine islands and the peripheral condition in the European Union. These features have been conditioning the development model of the Azorean agriculture, namely: the focus in monoculture as daily farming; the small dimension of the holdings, the extreme isolation between the farmers reduces efficiency and hinder the machinery support; excessively high production costs, transport and supply problems; inadequate processing and marketing infrastructure and a lack of diversification on the agriculture value change.

Terceira Island’s economy is mainly based on agriculture (dairy farming) and dairy processing industries, which fits the innovation platform of “food” from LIVERUR project.

Agricultural activity in the Autonomous Region of the Azores is a key sector of the economy and is a decisive factor for generating income for the local population. Over the recent years, this sector has shown relative stability in terms of production, due to the policy investment in modernization and the restructuring of the production chain. The regional directorate for Agriculture of the Azores Regional Government has work done in the improvement of quality systems of agricultural production, improvement and sustainable development of agricultural production and animal husbandry, vocational training in agriculture, animal husbandry and plant health and veterinary public hygiene. The policy makers have the awareness to understand the advantages of a competitive specialization specially centered on milk and meat production chains, where circularity is an obvious path, especially for the islands ecosystems. There are several sub-programmes to promote and finance agriculture and livestock operations such as POSEI and PRORURAL+, from ESIF. The main actors to be involved in the Living Lab will be the members linked to the agriculture associations, production industry, new rurals and rural entrepreneurs, research centers, governmental institutions, and end users.

The LIVERUR project identifies innovative business models within the newly developed Circular Rural Living Labs, and will conduct socio-economic-technology analyzes to identify, describe and compare the differences between the new approach of Living Lab and more entrepreneurial traditional approaches.

The LIVERUR project involves more than 20 European partners from peripheral areas in which the development of the rural economy is vital for their survival. Although LIVERUR is focused on Europe, one of the partners is located in Tunisia, which provides a greater internationalization to the project.