Umbria is the first Italian region to have obtained the recognition of the Dop (Olive Oil) throughout the regional territory (about 8000 hectares in production). And the name Dop Umbria is accompanied by five geographical mentions in which the oil can be produced.

These include the “Colli del Trasimeno” area – an area that occupies the northern part of the region, in a territory that extends into 17 municipalities including the capital Perugia, City of Castello, Castiglion del Lago, in which the hilly landscape degrades slowly to almost the shores of Lake Trasimeno. It enjoys a mild climate particularly suited to the cultivation of olive trees.

In Umbria (IT), in addition to olive cultivation, the HAZELNUT supply chain has taken the path of development and growth. In numbers but also in the quality of results and services, including aggregation, synergies and added value for agricultural enterprises. From about 40 initial hectares cultivated three years ago, to 110 in 2019 to reach the current 350 hectares (distributed in various areas of the region and in different altitudes), today this supply chain “concrete, sustainable and with vision to the future” can be said to have started to put solid roots, even if started recently. With the aim of getting to 1,000 hectares soon.

In addition to the development in quantitative and qualitative terms, the production of olive oil and hazelnuts, represent one of the most significant examples of the enhancement of by-products in a circular economy logic.

For the olive industry there is still talk of the recovery of by-products such as sanses, vegetation water and hazelnut (endocarpo) for energy and fertilizer purposes.

In the case of the HAZELNUT sector, prebiotic fibre (AXOS) in the shells and polyphenols in the fruit cuticola is increasingly important. In this case, in addition to the already known energy powers, interesting nutritional benefits would be added to consumers.

Olive and hazel have similar botanical characteristics and similar cultivation needs, they can therefore be more valued in a growing logic of circular economy even in the Trasimeno area, looking at the economy of the area but also the health of the population. 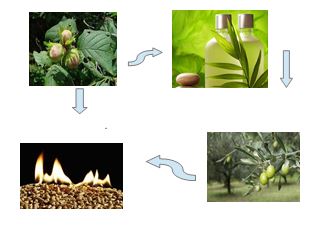 Written by Paolo Burini from UCT